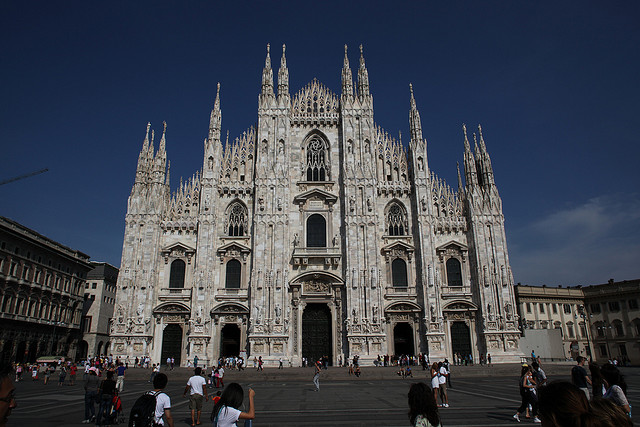 Milan is a beautiful city that manages to bring together visitors, residents, and those who are just passing through involving them, even if only for a brief moment.
But as many people know, Milan is a working city, and when the Milanese meet someone new, the second question they ask is bound to be, “What do you do?”, and not “Who are you?” Or “What do you like?”
I have always said that this city, which attracts people from all over Italy for its job opportunities, can make anyone feel Milanese, from the moment they sign their first job contract.
I tell you all this to explain why in Milan, as in any self-respecting metropolis, people from other regions or other countries perhaps outnumber the Milanese-by-birth, and thus even the restaurants are a reflection of the residents’ diverse origins. Here, excellent Japanese, Indian, Chinese or South American restaurants are easy find, and it doesn’t take much to discover those characteristic gems of Italian cuisine that offer regional specialities from Trentino to Sicily, via Tuscany and Lazio!
So I devised a way to give those short on time the chance to taste and familiarize themselves with the different territories while dining. Although I’m a self-professed foodie, I didn’t feel entirely confident in recommending the best of all the regions, and so I thought I’d ask for help from my network of Milanese foodbloggers. I naively imagined that each foodblogger would have been able to suggest the best trattoria for sampling the regional cuisine of their respective homelands, but after just a couple of questions I realized that each of them tends to cook their own regional recipes at home, frequenting only restaurants that specialize in different regional cuisines whenever they go out…and rightly so!
I carefully collected their most recent tips so I could provide you with all their sage advice on the matter:

Federico Malgarini, a Lombard by birth, told me how he got his passion for the regional trattorie of Milan from his father, who brought him along for the experience from the time he was little. Both he and  Ilaria Mazzarotta, a Roman with an English mother who moved years ago for love and work to Milan, suggest Taverna La Trisa for sampling the mountain, lake and river dishes from the valleys of Trentino. On the menu you’ll find deer and other game, delicious cold cuts, salmon trout and canederli (bread dumplings), just to name a few dishes…
Another excellent alternative is Delicatessen.

Friuli
A great tip on Friuli comes from Aldo Palaoro, a passionate food lover and top Milanese publicist for Gualtiero Marchesi and other great chefs: Vecjo Frìûl osteria, which is great for sampling the salami and other aspects of the excellent cuisine of this easternmost Italian region.

Piedmont
Christian Sarti and Francesca Sponchia, both Milanese, had no doubt about this one: Le Langhe in Corso Como and Trattoria Aurora in via Savona are exceptional for sampling special roasts and the best traditional sauces.

Veneto
For this region I refer to advice of mangiare.milano.corriere.it Valerio Massimo Visentin, the author of a famous Milanese guide, who suggests Trattoria La Veneta and that of other chef friends who recommend Ristorante Bell’Aria for sampling baccalà mantecato (creamed codfish), sarde in soar (sweet and sour sardines) and the superb white polenta.

Liguria
Barbara Sgarzi is a journalist in Milan whose heart lies back home on the Ligurian Riviera, and although she eats only her mother’s Ligurian pesto, she was able to give us some excellent tips, recommending multiple places that specialize in the savoury Ligurian cuisine: Via Prè on the canals in the Navigli area, U Barba, a great osteria with its own bocci club and dishes of the Ligurian tradition, and finally le Focaccerie Genovesi who, in addition to focaccia also serve trofie (twisted pasta), testaroli (pesto pancakes) and pesto to go.

Tuscany
When we get the craving for pecorino cheese, pappa al pomodoro (a tomato-bread soup), ribollita (day-old soup) and prosciutto, Emanuele Bonati and I think alike, heading over to Osteria Casa Tua in Porta Romana.
Alternatively, Teresa Balzano suggests Trattoria da Giovanni in via Fara and Colline Senesi in via Stoppani.

Emilia Romagna
http://www.thekitchentimes.it/ Anna Maria Simonini, Emilian foodblogger based in Milan, suggests Parma & Co, which displays and serves the most superb Parma salami and sausage, and where you can even find traditional handmade pastas. If, on the other hand, you wish to sample a heavenly handmade piadina, find your way to Divina Piadina.

Campania
For this region I myself suggest two excellent pizzerias, La Piccola Ischia and Frijenno e magnanno, whose menu also includes a list of traditional dishes and the most sublime buffalo mozzarella.

Calabria
Federico Malgarini endorses Dongio , with its classic Calabrian menu, while Teresa Balzano, Calabrian blogger based in Milan, suggests Moonlight trattoria and pizzeria,  which offers typical spicy salami and sausage, caciocavallIo cheese, and other delicacies, such as morseddu, a Catanzaro-style tripe stew.

Sicily
Anna Maria Simonini has a weakness for Sicilian cuisine and can often be found at Trattoria Trinacria sampling seafood dishes and Sicilian sweets, while Giorgia Tullio opts for the never-fail Antica Focacceria San Francesco nestled in between Duomo and San Babila, where panelle (fritters) are served alongside arancine (fried rice balls), milza (spleen) and swordfish roulade…

Sardinia
Roberta Deiana, the proudly Sardinian foodblogger and author, agrees with Federico Malgarini in recommending Trattoria del Pescatore for its unforgettable lobster. Anna Maria Simonini, on the other hand, recommends Isola dei Sapori for its exquisite seafood and selection of meats.

Lombardy
Emanuele Bonati does well to recommend the traditional dishes at Trattoria Milanese in Via Santa Marta as cotoletta (breaded veal cutlet), polenta, gorgonzola and mushrooms. Christian Sarti enjoys taking in the Milanese atmosphere of Osteria della Lanterna where he loves being welcomed by Milan’s pure Meneghino accent.
Francesca Sponchia has found two loves in the city: Trattoria da Tommaso , a place that has never left the 1960’s, but whose dishes, such as Milanese tripe and ossobucho (marrow-filled veal shank), are faithful to the tradition; and chef Cesare Battisti’s Ratanà a sophisticated restaurant with the city’s best risotto dishes. I agree with Francesca whole-heartedly on the latter, as does Milanese journalist and blogger Sandra Longinotti. Sandra also adds L’Altra Isola to the list, for its specialities such as cassoeula (a seasonal pork and cabbage dish) and the classic cotoletta Milanese.

Now all that’s left for me to do is to wish you a pleasant giro d’Italia in Milan!