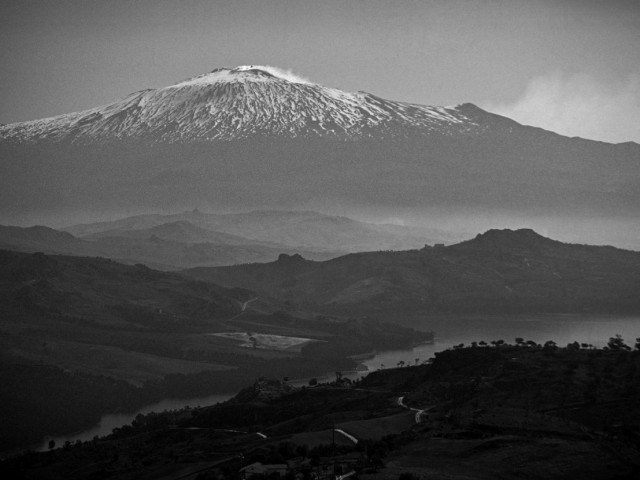 Sicily possesses untold riches that represent the island’s cultural heritage as it changed hands from Phoenicians, Punics and Greeks to Romans, Vandals, Arabs and Normans, Aragonese and Spanish. It is the architecture that tells these stories in Palermo, Cefalu, Agrigento, Catania, Siracusa and a host of other smaller and more remote places. But there is much more to see than buildings and ruins; I had heard that in spring the Sicilian landscape around the centre of the island is a vibrant carpet of rich grasses and wildflowers. This I thought would provide a perfect opportunity to indulge in the quiet art of landscape photography and a welcome relief to an endless succession of ruined temples, churches and museums. Maybe, somewhere in these quiet verdant hills, I would even catch a glimpse of  Goethe’s Italian “soul”.

Heading west from Catania, skirting around the ever present monolithic shape of Etna towards the centre of the island around Enna Province, the veritable heart of Sicily, it was a relief to be liberated from the urgent traffic of the city centre and to suddenly find myself on the quieter roads used as much by cows as cars. The first place I stopped was at Centuripe, known as the ‘balcony of Sicily’ because of its impressive strategic position that always made it of military importance so that Cicero called it the greatest and richest city in Sicily. On the road to Leonforte I noticed endless graphic compositions of texture and saturated colour: the rumours about what happens to Sicily in spring now seemed well-founded. Leonforte itself was a wonderful surprise: a charming small town whose buildings merge into the colour of the arrid landscape once the summer sun has scorched the fields. But right now the rich colour of the stone forming the impressive Granforte fountain contrasted with the green hills of the panorama surrounding the 24 spout fountain that was built for the town by the 17th century Branciforte family once based on the hill above. I found much to see and photograph here and could have stayed longer, but the road beckoned and thoughts of the evening menu began to distract my attention.

In central Sicily you cannot expect to find a hotel at every junction and night had long fallen by the time I reached my hotel in Nicosia, but I was in time for my journey to be rewarded by a satisfying tuna steak followed Majorchino cheese, a type of peppered Pecorino from Messina and all washed down by some Corvo wine. In Sicily one rarely gets the option of traditional antipasti, instead a starter might be cacio all’Argintera, fried or roast cheese with herbs and achovies, or panelle, chick pea fritters. Couscous is popular here while most pasta dishes combine the flavours of the sea which yields up rich ingredients for many of the main course dishes.

The next day I was greeted with a superb view of the town from the hotel terrace. This is an ancient settlement on the slopes of the Nebrodi Mountains and had its heyday in Norman times. Although it suffered from losing nearly half of its adult population to emigration in the mid twentieth century, it is an important agricultural and commercial centre full of atmospheric cobbled streets and old weathered men standing around conversing in their distinctive gallo-italico  dialect. Despite suffering extensive damage in the 1967 earthquake,  Nicosia still contains some fine architecture, particularly the fourteenth century Cathedral of San Nicola in the Piazza Garibaldi and the fine Norman church of Santa Maria Maggiore at the top of the town. The return journey consisted of a winding route back through Leonforte, punctuated with further viewing stops, to reach the A19 to accelerate my return to Catania. I’m not sure I glimpsed the soul of Italy, but I feel privileged to have been allowed to indulge myself by dallying at the centre of its principal island. 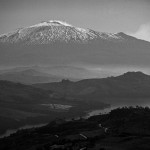 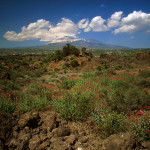 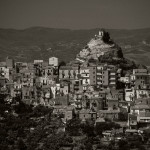 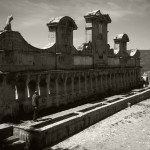 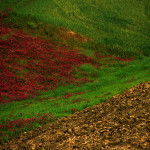 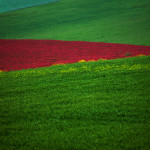 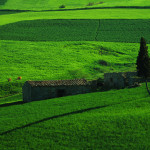 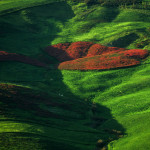 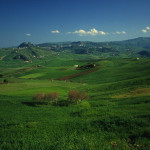 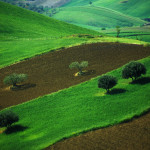 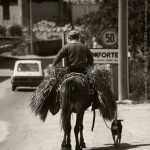 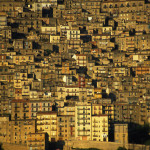 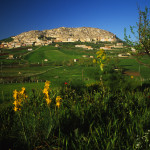