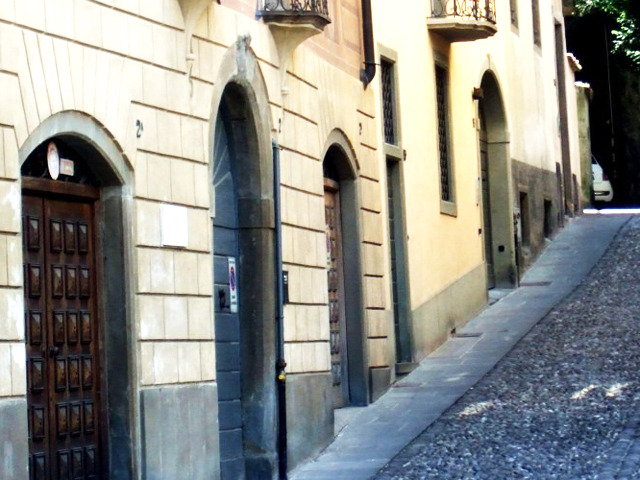 Bergamo is an easy day trip from Milan, taking less than an hour by train.

This scenic medieval city of 120,000 people is located in the Lombardia region of Italy in the foothills of the Alps. From Bergamo’s train station a one-euro bus ticket provides me with transportation up the hill to Bergamo Alta, the upper part and historic center of Bergamo. 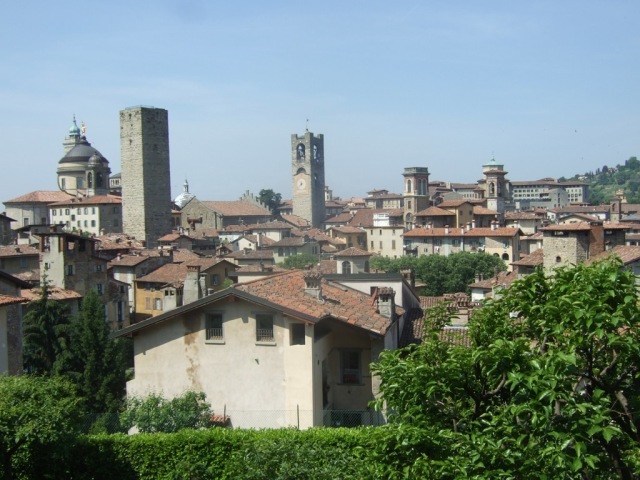 Like many small towns in Italy, Bergamo has two sections, the lower part or “cittá bassa” and the older historic center up on a hill, the “cittá alta.” 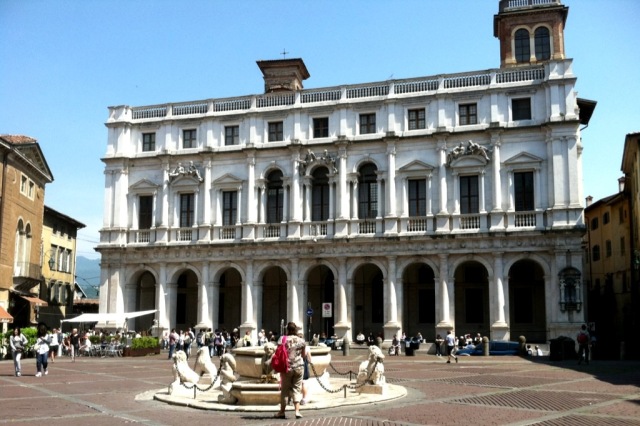 The beautiful Piazza Vecchia  is the heart of the old town in Upper Bergamo. In the center of this piazza sits a fountain which was presented to the city in the 18th century. Other landmarks here are Palazzo Nuovo, the 14th century Palazzo Podestà and the Palazzo della Ragione with its 12th century bell tower. 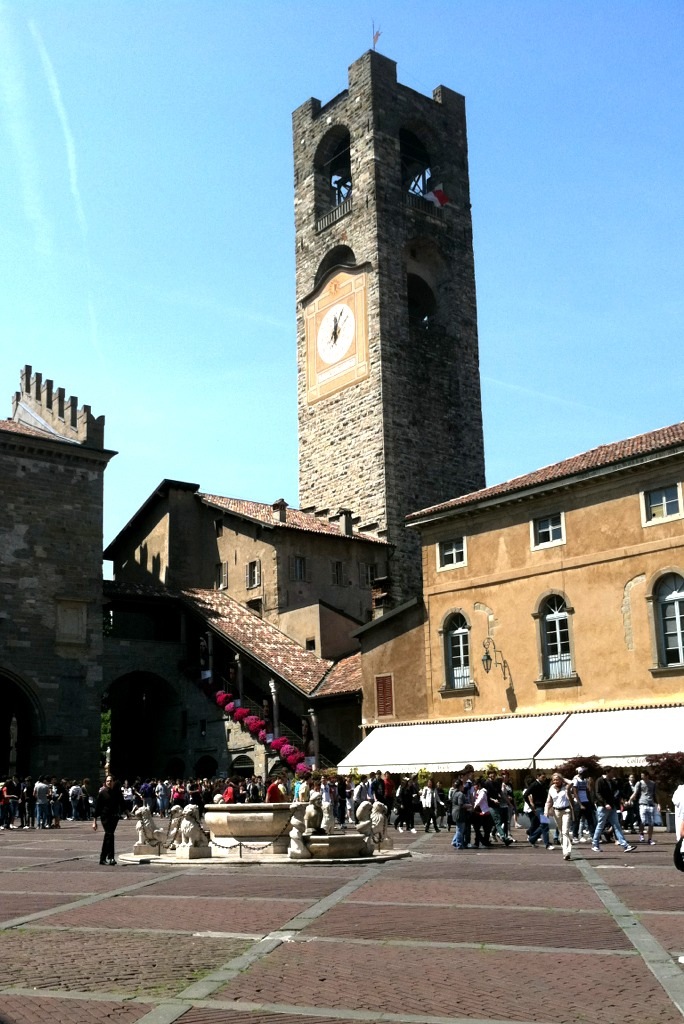 The tower is 174 feet high and you can take an elevator or climb the 230 steps to the top for commanding views of the city and the distant Alps. 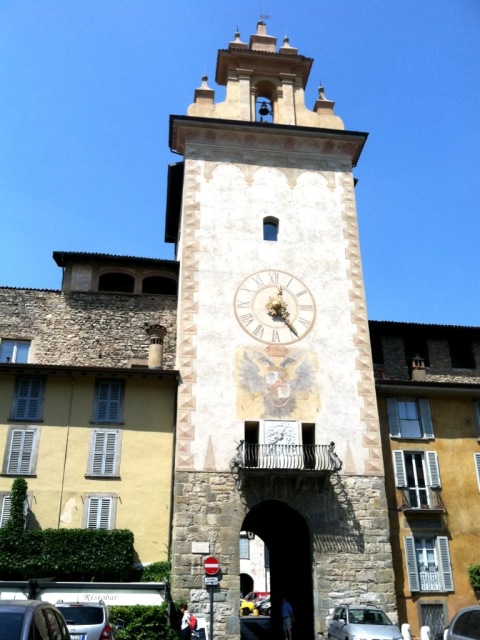 It is especially beautiful late in the day or at sunset. Every night the bells toll 180 times at 10pm, dating back to the ancient times when the city gates closed at that time, and the bells rang as a warning to its citizens. 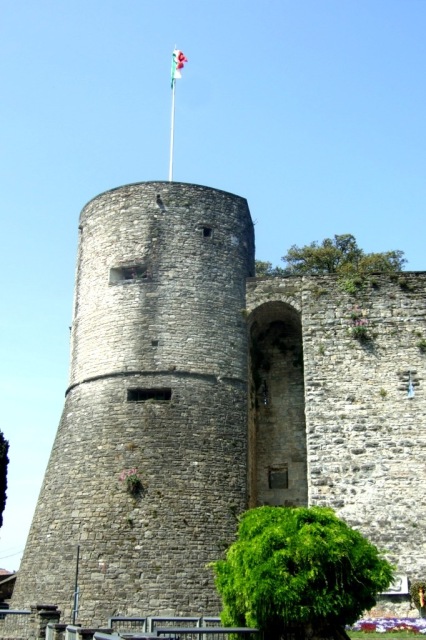 High on a hill is La Rocca, an old fortress. From this vantage point I find beauty in the panoramic view of the city as well as serenity in the park surrounding the tower.

Inside La Rocca is a museum which is open to the public. At one time this former Roman military camp had been a prison and also a barracks. Executions took place in the park which is appropriately named Parco delle Rimembranze (Park of Remembrance).

The most famous church is Upper Bergamo is the Basilica di Santa Maria Maggiore in Piazza del Duomo. This 12th-century church has a reputation for being one of the most important buildings in this entire region. Stepping inside leaves me with a respect for the medieval art as I take in the tapestries, frescoes, paintings and sculptures. The exterior is equally impressive with sculptures of lions and intricate carvings on columns and exterior walls. 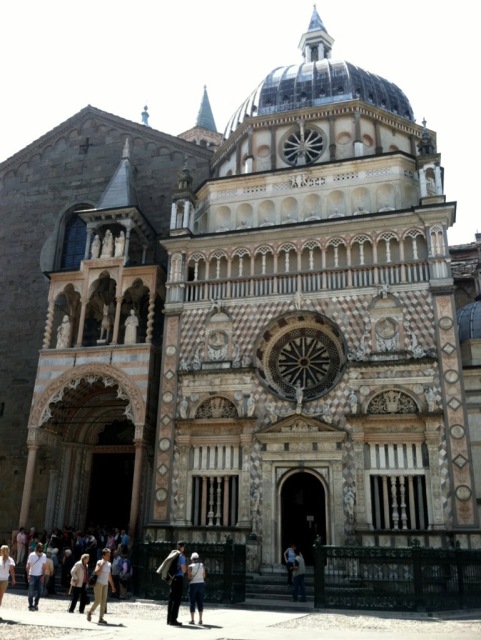 Bergamo Alta is not very crowded. The pleasant aromas of freshly baked pastries fill every street and small shops and flowers abound.

Two funiculars operate here in Bergamo. One rides up to the highest point to see Castello San Vigilio, but like most shops in Italy, even the funicular is closed between one and three.

After several hours of wandering I feel a little tired and hungry. Ristobar Campanello is the perfect spot for a pomodoro and mozzarella bruschetta. A day trip to Bergamo may not seem like long enough but then there is always a reason to return.

–Margie Miklas
Margie is an American writer with a passion for Italy. She writes the blog, margieinitaly. Follow her on Twitter, FaceBook , Instagram, and Pinterest. She is the author of the award-winning book, Memoirs of a Solo Traveler – My Love Affair with Italy and also My Love Affair with Sicily and the recently released Colors of Naples and the Amalfi Coast.

Concierge tip: To experience a Bergamo day trip from Milan just like Margie, consider reserving a Sensational Suite deal at Baglioni Hotel Carlton to enjoy up to 25% off and a stay to remember.