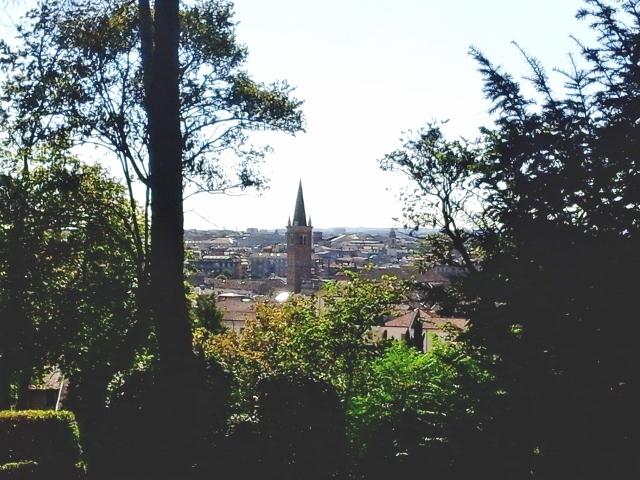 Behind an unpretentious 16th century building, in a narrow Veronese alleyway, is a small treasure: the garden of the Villa Giusti, one of the oldest examples of an Italian garden.

The large portico facing the road surprises us with an incredible view of the cypress-lined path, transformed into a theatrical stage by the large entrance columns. Crossing the threshold takes us into the garden itself, the final testimony to our civilisation. We pass through the wrought iron gate, decorated with its flower motifs that hint of a magical, secluded place that is both mysterious and grand. 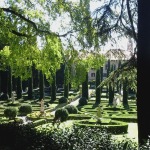 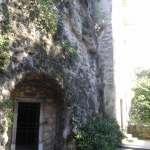 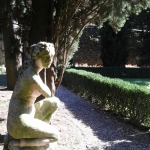 Agostino Giusti was the Grand Duke of Tuscany who was made a Knight of the Republic of Venice after his family moved to Verona from Florence. Like every Florentine noble family, Agostino wanted a small Boboli Garden for himself. The work began in 1570 and was not easy: the land was sloped and was also surmounted by a grotto! In accordance with the fashion of the period, the level area was arranged according to precise geometric plans and split into two halves by the cypress-lined path.

We suggest that you don’t head straight to the path, but make your way there slowly, losing yourself in the arabesques formed by the flowerbeds, fountains, and statues that surround it. To the right, in fact, we can enter a tangle of hedges: these are the four quadrangular beds of box trees, guardians of Athena, Apollo, and other pagan gods. The statures, created in the 1700s by Lorenzo Muttoni, are faithful copies of the originals made in the 1600s. This little Olympus of stone is perfectly camouflaged among the carefully arranged vegetation, full of old myrtle, lemons and rose plants. The only sound that accompanies our footsteps is the quiet whisper of the great fountain, made of red marble—and then there’s the labyrinth, one of Veneto’s oldest survivors. 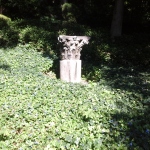 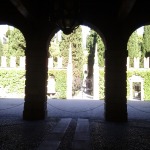 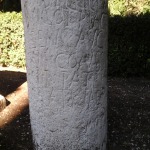 Finally, we arrive at the cypress-lined path, a climb that takes us from the lower garden to the upper garden. Its arboreal colonnade, which mark its perfect proportions, guides our view to the great, menacing stone mask. This monster carved out of the rock was the true protagonist of the Grand Duke’s parties, who would animate it with blasts of flame and mirrors inserted into the small cave alongside. A genuine triumph of the Renaissance.

Having walked the length of the path, we arrive in a steeply graded area with narrow paths covered in ivy. We say goodbye to the 1500s and enter abruptly into the romantic 1800s, with its ruins and poignant glimpses of the landscape. Ancient Roman tombstones peep through carpets of ivy, while a Corinthian capital rests on a bed of beautiful blue flowers.

On reaching the entrance to the grotto, we are surprised by another unexpected structure: a small bell-tower. Hidden within is a spiral marble staircase.

The glitter of dazzling blue flowers greets us in the upper garden, nestled peacefully on the hills of Verona. To the left we can see a small marble pergola that brings to mind a painting by Hayez—a major exponent of Italian Romance painting. At this point, the various eras become mixed and jumbled together: the portico is a perfect frame for encounters between Romeo and Juliet; the carpet of flowers seems designed for Ophelia, while the breath-taking view over the centre of Verona speaks of Gothic bell towers, of medieval wars and cavaliers, and fables of long ago. 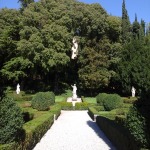 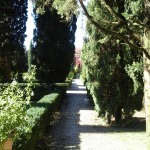 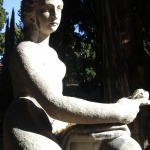 We return to the city’s everyday traffic, now enamoured of the Grand Duke’s treasure. But you can visit every day, between 0900 and 1900, from October to March; between April and September, the opening hours are extended to 2000. Tickets are 7 Euros, and the Villa is reached by leaving the Teatro Romano (Roman Theatre) behind you and following the Adige river. The street’s name changes to “Via di Villa Giusti 2”. This journey through art is easily begun.

Giulia Zanoletti is a freelance journalist who has lived in Milan and Rome writing about cinema, theatre, and opera. With an eye for guerrilla marketing, she loves Italian culture, French cinema, and British irony.

Concierge tip: Villa Giusti, and all of Verona’s other tourist attractions, are easily reached from Milan or Venice. If travelling with your family, Baglioni Hotels recommends their Luna Hotel Baglioni in Venice, or the Carlton Hotel Baglioni in Milan. We await you with special benefits that will delight even the youngest children.