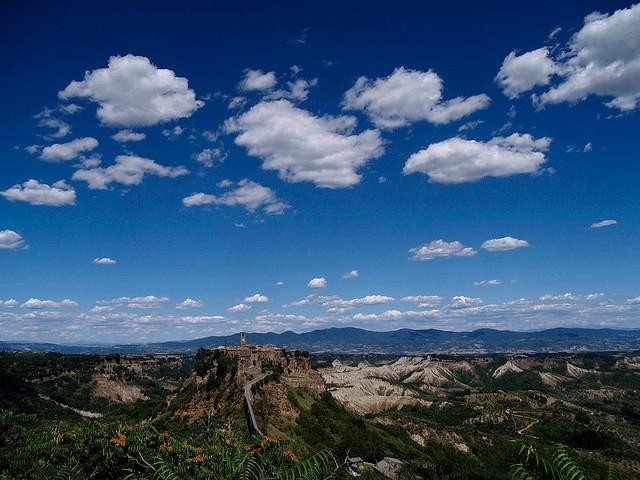 UNESCO has warned the Italian government that unless action is taken, the ruined Roman city of Pompeii might go on the ‘heritage in danger’ list. Mosaics unprotected from the thousands of feet that stroll across them every year are starting to deteriorate, murals are flaking off and even the walls of ancient houses have collapsed.

The irony, of course, is that if Pompeii is in danger now, it was far more endangered back in 79 AD when Vesuvius erupted – and it’s to that event that the Roman remains owe their remarkable state of preservation in the first place.

But Pompeii isn’t the only Italian site to balance precariously on the edge of an abyss. Civita di Bagnoregio, a tiny hill town, does precisely that – its houses perch above a ravine carved in soft tufa, perilously close to landslips where the erosion of softer strata of rock has sent vast areas of land sliding down into the gulf.

It’s a dramatic setting, all the more so since a long bridge snakes across the void, with Civita rising at the other end like the prow of a ship. On a misty day, Civita emerges from the vapour like the creation of a new world out of nothing.

Civita itself was once an Etruscan city; now there’s just a handful of residents. Beneath cobbled streets, Etruscan wells and drainage shafts and musty wine cellars honeycomb the rock. A chapel in a cave, an Etruscan tunnel, a couple of restaurants are all the tourist attractions you’ll find. And yet Civita has a muted charm that other hill towns can’t match.   Perhaps simply knowing that the landslips are getting ever closer makes you value it a little more.

In Venice, the problem is not the land but the sea; the water inundates Piazza San Marco at the spring tides, and floods the ground floors of the great palaces. Venice was built on marshy islands which only gradually coalesced into a city; under the glittering stone and flaming brick lies an underworld of oozing mud and rotting wooden pilings. While individual buildings have been beautifully restored, the whole city is gradually slipping into the sea.

Take a trip out to Torcello and you feel just how marginal and fragile Venice is. Torcello is a melancholy place; a few scattered houses along a small canal that leads to the cathedral and baptistery, once the centre of a city grander and more populous than the younger city of Venice. Nowhere on the island rises more than a few feet higher than the waters of the lagoon, except for the cathedral. Footpaths lead into the marshes and out to the edge of the island; there, the land merges muddily into the lagoon, and tiny inlets nibble away at the reed banks. When it rains, sky, sea, and land blur into one grey, wet smudge.

Venice too is dying. But it’s been dying ever since the end of the Venetian Republic, defeated by Napoleon in 1797; it’s had a lot of practice at it. Perhaps it’s that melancholy, as much as the gaiety of the Carnival or the remains of the Doges’ pomp and circumstance, that gives the city its character and its power over our emotions.

All the more reason to see these great cities on a grand tour of Italy as soon as possible.