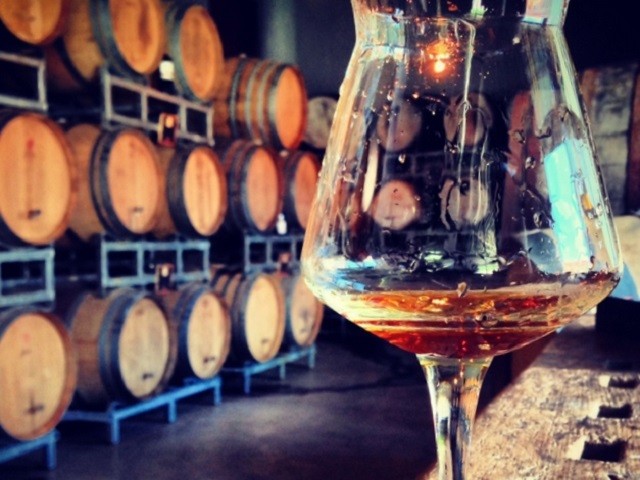 For a little while now, civilization has been linked with what you put in your mouth. The ancient Sumarians thought you were alright if you ate bread. The British empire was built on (or perhaps for) tea. And for their part, the Romans planted vineyards wherever they went and worried that if you drank beer you were a barbarian or a German. Usually both.

Italian culture isn’t famous for rapid gastronomic about-turns. Since the tomato appeared post-Columbus, they’ve basically stuck to a winning formula. But over the last decade or two there’s been something of a sea change in Italian brewing. The Slow Food group, famous for quality wine and food recommendations, now publishes a Guide to Italian Beer. This year it mentions over four hundred breweries in Italy, a number likely to expand significantly before the next volume is published. This is seismic: twenty years ago there were barely a handful of craft breweries in the country.

And they’re good. A mixture of a culture obsessed with flavor and a relatively aggressive tax rate on beer means that to appeal to Italian palate and turn a profit most microbreweries are driven to produce quality brews with the best possible ingredients. This makes for a vibrant and exciting craft beer market: refined brews in luxurious bottles to be paired with traditional specialities. In short, if you like exceptional food and top quality craft beer, Italy is the place to visit. So: where to go? Well that’s what I’ve been trying to find out…

Wild hops growing near the Bruton brewery in Tuscany.

For many, Rome is the capital of Italian beer. Despite being in the relatively brewery starved middle of the country (around a quarter of brews originate in the bottom half of Italy), it’s a hive of beer activity. The granddaddy of the region is Birra Del Borgo, which pioneered the Italian style IPA. But you’re really spoilt for choice from the moment you arrive: coming in by plane the Birradamare brewery is a short drive away, on the high speed Italo train you arrive practically inside the Eataly brewery. And the bars and restaurants in the eternal city are also rapidly jumping on board. The trendy Trastevere neighborhood, for example, is packed to the brim with restaurants and bars serving enough local craft beer to make San Francisco or London blush.

As you move further north, the climate means you’re getting towards more natural beer country. The head brewer at Lucchese brewery Bruton told me that his grandmother used to cook risotto flavored with wild local hops. So it’s no surprise that Tuscany is a region churning out some really interesting brews. Take the Petrognola brewery in the beautiful Garfagnana region. They’re brewing with spelt from fields that have been cultivated with the grain since Roman times. Barbarians 1, Romans 0 (I suppose the sack of Rome means it’s 2:0, but who’s counting). Or the Del Forte brewery which is quietly putting together a delicious lineup at its operation on the Tuscan coast: no surprises that they pair excellently with fish.

There’s a good scene in Florence too, with beer focused bars popping up and brews appearing in more and more restaurants: the trendier ones are starting to have beer menus to rival the wine lists.


The beginning of the BirraPioneer.com adventure to find the best breweries in Italy…

But to be honest, I could easily have switched Rome, Florence and Lucca with Venice, Bologna and Amalfi, or countless other cities and towns with vibrant and growing beer cultures. The story would be just as rich, but the beers would be particular to their area.

That's because whilst beer might be a foreign invader, it’s being embraced with Italian passion a focus on balance? obsession over ingredients and a healthy dose of campanilismo.

Birra Khamen near Perugia makes a beer using local lentils with a flavor perfect for washing down the truffle infused salami they also make on the farm.

Baladin in Piedmont ages their Terre reserve in Barolo casks (amongst those of other big local wines). Sicilian brewery Rocca Dei Conte makes a beer with the local carruba fruit that goes well with Modican chocolate. And of course freshness comes into the mix: dozens of breweries have autumn brews coming out to coincide with the hop harvest and some make special brews with bold seasonal ingredients like hazelnuts.

All in, and angry centurions aside, these are exciting times for the brewing industry in Italy. My advice would be that if you find an osteria or trattoria that serves craft brews (and that’s getting increasingly likely…) do what you’d normally do in Italy: order up something local and fresh. And, this time, made of beer. You won’t be disappointed.

For more on the breweries featured here visit Rome, Lucca, Florence, Piozzo (Baladin), Modica and Perugia (Khamen) on my blog.

Matt Brown is a British American living in Italy creating exciting brands, drinking delicious beer, swimming, running and taking train journeys whenever he can. He tweets @mfhbrown and blogs at www.birrapioneer.com.

Concierge tip: Premium beer lovers may wish to include a gourmet food experience in Rome as part of their Italian adventure.