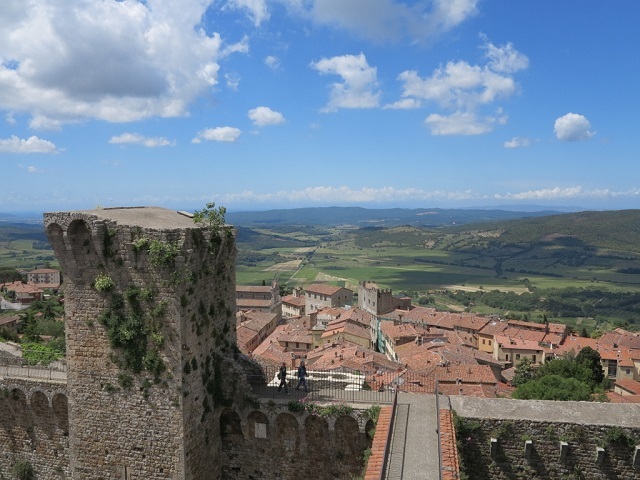 Massa Marittima is a Tuscan gem. As soon as we strolled into the town on a sunny spring day we were entranced.

The town was founded by the Etruscans and has lived through many changes. Today it is a wonderfully preserved and well kept town. The spectacular Piazza Garibaldi is surrounded by stunning medieval buildings.

The cathedral of San Cerbone sits high above the piazza and is reached by a steep stone stairway, making it seem very imposing. It is built of Travertine and was begun in the 12th century and finished in the 13th century. It has had several renovations over the centuries. It boasts a rose window with rare 14th century glass, a Romanesque font from 1,267, a Gothic reliquary (1316) and a 14th century fresco under which is a Roman sarcophagus from the 4th century…and many other amazing pieces.

The church is in the part of Massa Marittima called Citta Vecchia, the old city. A steep uphill walk will take you to Citta Nuova, new city. I don’t know why it is called this as its incredible Candlestick Clock tower was built in 1,228 and the Sienese Fortress dates from the 14th century.

It is possible to climb the tower via a very steep and narrow set of stairs. It was well worth the climb for the magnificent view across the town and the surrounding countryside to the sea.

I think Massa Marittima would be an excellent place to live. It is beautiful town with lots of facilities including a lovely park set high on the hill at the very top. It is a cool and inviting place to walk at any time of the day, and a great place for a picnic.

There are several interesting restaurants and cafes in Massa Marittima. We had a delicious lunch in the sunny Piazza Garibaldi and later wandered through the streets admiring the many shops selling local products.

Massa Marittima is not really on the tourist trail, but it should be. It is in southern Tuscany, about 50 kilometres NNW of Grosseto. Interestingly, the name Marittima doesn’t refer to the sea, but to Maremma, the name of the area.

– Debra Kolkka writes two blogs, Bagni di Lucca and Beyond and Bella Bagni di Lucca. With a background in fashion, this Australian splits her life between her home country and her beloved Italy, enjoying the best of both worlds. You can find Debra on her blogs.

Concierge tip:  Complement your experience of Massa Marittima with a stay in Punta Ala. The Hotel Cala del Porto is heaven for golf enthusiasts with its Golf Special package, which includes 6 green fees which can be used on various golf courses in the region.