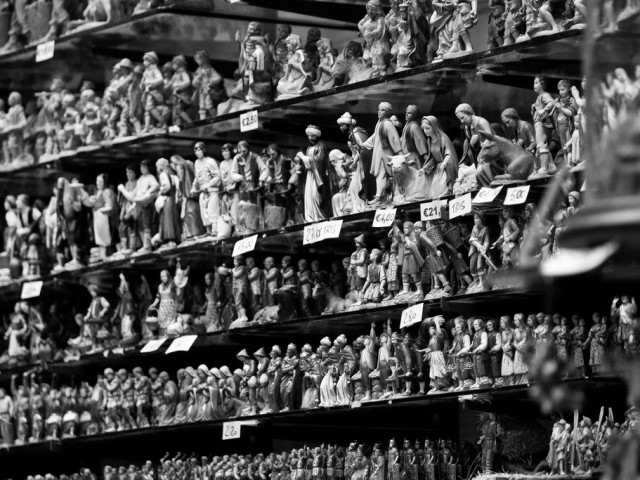 Naples is a truly special place. The breathtaking beauty and serenity of its views is unique, a special light shines on this city which has practically given it a lovemark.
The ancient civilisation, its natural port in the centre of the Mediterranean and its perfect climate have all helped to attract people from all walks of life. Navigators, traders, poets, writers from all over the world, who once landed in Naples not only succumbed to its charm but also contributed to enhance it.
The city is full of contradiction, between spirituality and passion one of the  real distinguishing features will always be " 'a ggente"; that is its people that colour the city in many amusing and original shades.
Christmas brings out the Neapolitan nature to a hilt, 10 posts do not suffice, perhaps 2 or three volumes would be better to describe all that happens in Naples during Christmas time. I will try to give you a summary which I hope will convey the general feeling  and in which I will place special emphasis on the culinary aspect, my profession.
The festivity, or better, the festive season, witnesses the fervent preparation of the two main meals: Christmas Eve Dinner and Christmas Lunch; on St. Stephen- the 26th December usually people feast on tons of leftovers from the two days before.
During the feast some of the local traditions turn into obsessions and pure art: let's start with the crib shepherds (pastori) of San Gregorio Armeno, a main thoroughfare in Naples, where these are produced, sold and exchanged in full  Neapolitan tradition which sees  cribs as the focal point of Christmas.
A walk down this road is an extraordinary experience, tens of shops show sacred images and personalities who will eventually be placed in the crib.
Thousands of statues of shepherds, farmers, inn-keepers, bakers, butchers, fishmongers, washer women, tables, chairs and all kinds of tools reproduced in miniature version to embellish and to add originality to the most important Christmas symbol in Naples. Mocking personalities is also popular, little statues are created to depict those politicians, sportsmen and businessmen who happened to be in the limelight during the preceding year.
In the past, as at present,  many people become sculptors and artisan model makers to create the most original cribs characterized by a mix of statues representing Christmas eve scenes in Naples, which are different to the Jewish crib which shows images of two thousand years ago, moving the manger from  Bethlehem to Naples.
The only way to visit San Gregorio Armeno during Christmas time is to make your way through thousands of people, spectators and buyers who crowd there in drones and who, in any case, render the experience even more unique.
Moving on to the preparation of Christmas lunch, an essential role is played by  fishermen: they are the ones who fill the tanks with eels, the famous "capitone". Thousands of live large, black eels swim around mesmerising warmly clad children who, on their way to school, stop to stare at them before being called to heel by their mothers.
These tanks are placed in the street and are guarded day and night until Christmas Eve; a delicious starter which is prepared fried on Christmas eve and soused the day after. Fishmongers remain open 24/24 for over a week even because they are packed with oysters, large tanks full of clams, lupins, sea urchins, hard clams, maruzzielli and wedge shells which will all find their way into the antipasto sauteè or the "Linguine di Gragnano a Vongole" (Clam Gragnano Linguine) which is an absolute must for Christmas Eve dinner.  Tightly hugging Lobsters and clawed lobsters,  tied sea-breams, sea-bass, red and unsightly but exquisite scorpion fish: all this white fish will be either baked or prepared "all'acqua pazza" that is stewed in the traditional method. Large dishes full of mullets, red and pink prawns, shrimps next to calamari will all the essential fry up to be eaten on Christmas Eve. Of course there is also place for Norwegian white and crispy salted cod covered in batter which preserves its solid and white heart.
Christmas Eve is a religious feast, therefore no fatty foods or meat must be eaten. However the richness laid before the patrons is sensational. The typical "supporting salad" consists of boiled cabbage, carrots, small round peppers, dried tomatoes, Gaeta olives green olives, anchovies, capers, cucumber and a thousand other variations, all dressed with the oil and vinegar inevitably placed at the centre of the table.
The summer vegetables previously preserved and placed in cupboards make their way out in full regalia, hot eggplants in oil, gherkins, small green peppers, chilies, sub-dried tomatoes, are all a reminder of summer and of the housewives who judiciously thought of preserving them for Christmas.
The fried fish starter is followed by the linguine with clams and the fish above described, the table is covered with an embroidered tablecloth which recently began to include red. A variety of dried fruits, dates, sultanas, currents, figs, almonds, apricots and Sorrento walnuts together with Giffoni hazelnuts, chestnuts (castagne del prete and castagne piste), all make their way to the table. All this food whiles away the time until midnight when everybody goes to mass, sated and happy. On their return from mass the children place the statue of Baby Jesus in the crib, during a procession which involves the entire family. This is the point where dominant and unconditional tradition sees a division of Neapolitans into two distinct groups: those who open presents on the Eve and those wait until Christmas day to do so.
To be continued… 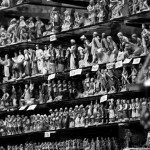 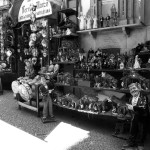 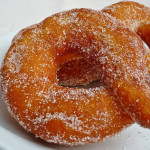 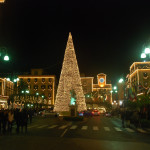 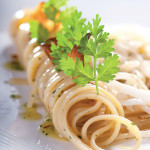