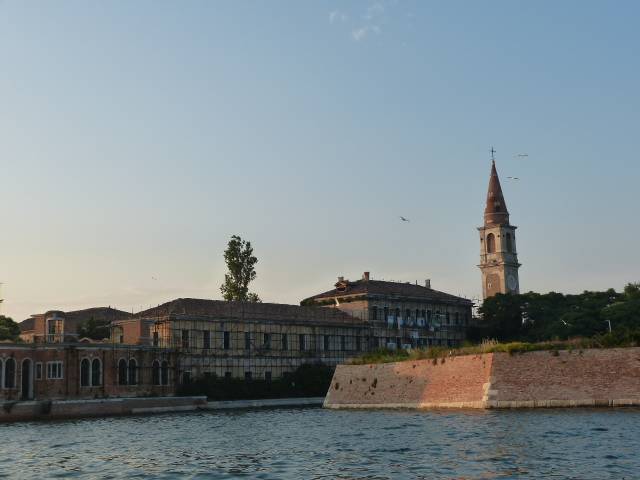 Less than two miles from St Mark’s Square, between Venice and the Lido, lies what has been named the most haunted island in the world.  Over the course of history, Poveglia Island has served several purposes: as a way station to quarantine people arriving in Venice by boat where they remained in confinement for 40 days before being allowed into the city,   a burial ground for victims of the plague, a mental hospital and most recently, a home for indigent old people. Since 1968 the island has been abandoned. Abandoned, and forgotten. Until a few months ago.

In April, the Italian government put Poveglia Island up for auction, for lease for 99 years. Venetians rallied to save the island for themselves, devising a plan for anyone to participate by purchasing a share for 99 Euros.  The hope was the group could raise enough cash for a winning bid at the auction, and convert the island into a public park.

In addition to raising a fair amount of money, around 170,000 Euros, they also raised awareness for Poveglia Island.  It became as talked about as the nearby islands of Murano and Burano.  Murano and Burano islands are very popular tourist spots, with visitors flocking to see glass making and handmade lace demonstrations daily.  Poveglia Island did not become a tourist mecca, however.

It’s a very common local legend that so many people had been burned and buried on Poveglia Island during the plague years that the soil on Poveglia is 50 % human ash.  No glass or lace making is going on over on Poveglia.  There are no vaporetto boats going back and forth to Poveglia as they are to most of the other small island in the lagoon surrounding Venice.  You can’t even rent a private water taxi over there. No one will take you there. It’s haunted, they will tell you.

If you are lucky enough to finagle some boat transportation, as you approach the island the view is hauntingly beautiful.

It’s quiet, still.  As you get even closer, and motor  to the back side of the island, you get a first glimpse of the old  octagonal shaped fort  , one of five built by the Venetian government in the mid-1600’s to protect entrances to the lagoon.

The outside of the old mental hospital has scaffolding on it, not because any new renovation is going on. Instead, it was erected around 20 years ago to help keep the building from falling down. The bell tower, a last remaining remnant of a 12th century church, which also served as a lighthouse at one time, is bricked up.  Another local legend claims the psychiatrist who ran the mental hospital on Poveglia threw himself from the window of this bell tower, after having gone mad with guilt at the torture patients suffered at his own hands.

While many locals will tell you no one sets foot on Poveglia, the day I was there I saw evidence to the contrary. There were 2 small sailboats anchored nearby just like we were, a small motorboat with a few fishermen on it, and lots of fish nets drying on all the walls.

The island is a mass of overgrown brambles, with a rare path here and there.

Clearly this door hasn’t been used in years. One can only imagine what you’d find inside if you could get past the door. At another building, nearly the same thing – vines covering the door and broken glass all around.

Inside one of the buildings, debris is strewn everywhere.  Paranormal experts have said a presence of spirits could be felt on Poveglia. When my husband looked at the photo above after he got home, he noticed several darker “shadowy” things that were not there when he snapped the photo. Spirits on Poveglia, perhaps?

All photos property of  Karen and Michael Henderson

Concierge tip: Take advantage of the range of special offers at Luna Hotel Baglioni to bring your Venice adventure to life and to discover the city’s many hidden secrets. You can choose the most suitable deal on the Baglioni Hotels website.