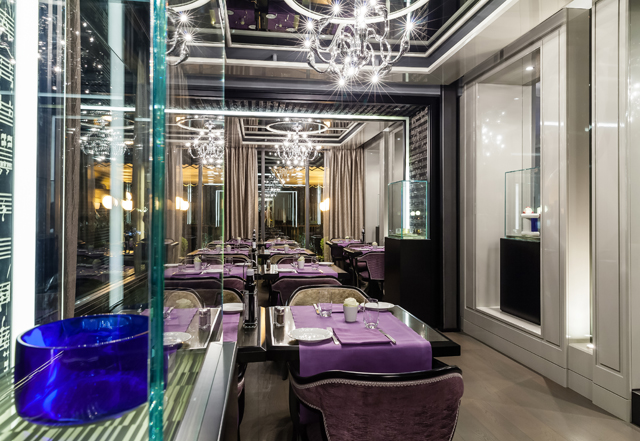 We are delighted once again to welcome Stanley Moss, travel editor of the New Zealand-based fashion magazine Lucire. Stanley shares with Italian Talks readers some of the experiences and impressions gathered throughout his recent grand tour of Italy. 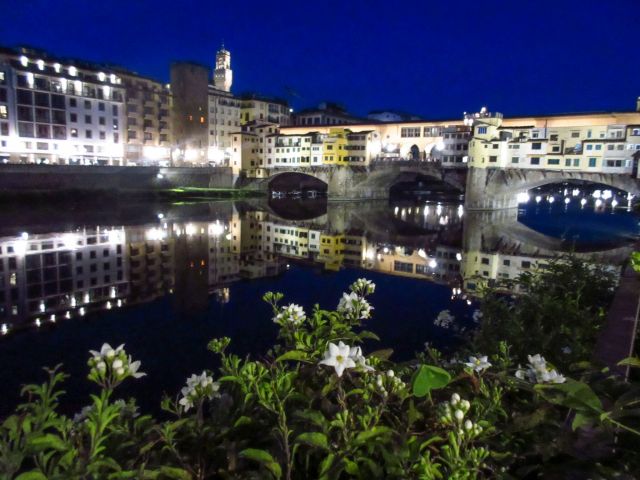 Easter weekend and the train to Santa Maria Novella rumbles into town at 9pm after a heavy rain. The station’s nearly empty. Let’s not call it a torrent, but the cobblestone streets are still shiny in the streetlights. I opt for a cab, though I could easily walk it, and five minutes later I’m floating through the foyer of the Relais Santa Croce, up the broad stairs, back to the familiar front desk. There’s a fire roaring in the big room next to reception, and a very happy couple sit shoulder-to-shoulder on the wide couch facing it and I don’t want to disturb their moment, so I wander over to the window and stare down at the street below.

By now it’s lightly misting outside, deserted. Why the heck not? The deskman hands me a big umbrella, I say I’m just going to take a short stroll, and out I go into a Firenze I have never seen, not a soul on the street, a glossy night, with the luxury to meander at my own pace. My eyes fall on stray details, the peculiar iridescence of white marble through the diffuse screen of fog, columns and facades which are heroic, opulent, ornate, towering overhead, the absence of noise, the occasional flash of a colorful neon sign in a dark window, unseen sculptures in hidden alcoves.

Usually I am jockeying humans on these sidewalks, trying to avoid rear-ending somebody. Tonight I wander unencumbered into Santa Croce, swing through the Duomo, loop down to the Arno, cross the Ponte Vecchio which is empty and feels like a movie set. I lose all sense of the hour. But at 1230am, two and a half hours later, I’m back climbing the stairs at the Relais. “Had a good walk?” the deskman asks, glancing at his watch. “Far too short,” I answer. He sighs. “The restaurant is closed, but have you seen our Room Service menu? We can have something delicious up to your room in no time!” 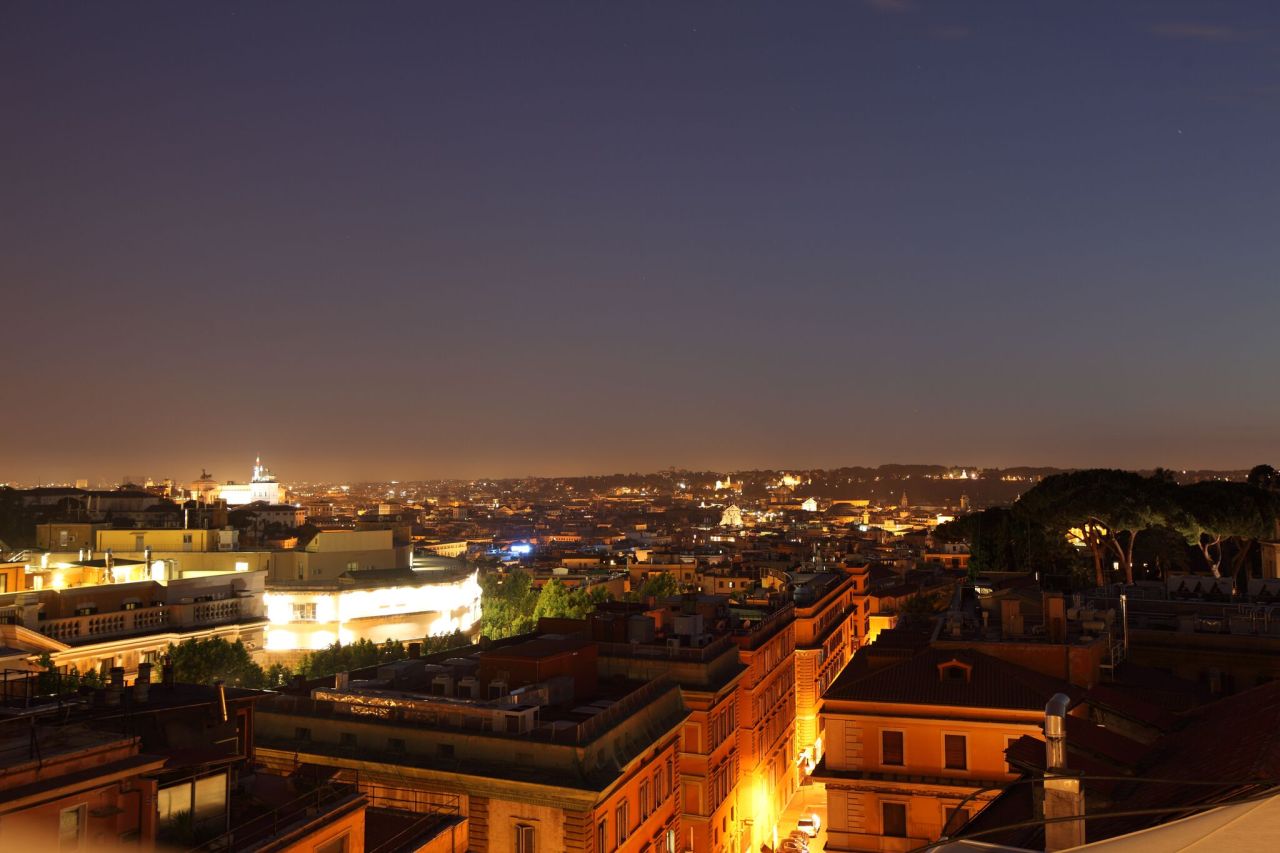 Rooftops. I can’t stop staring at the rooftops. They stretch ahead of me to eternity, a thousand shapes, into infinity. From my perspective on the roof terrace of the Baglioni Hotel Regina, overlooking the Via Veneto, a swirl of recollection encompasses me, and I dream of La Dolce Vita, La Grande Bellezza, seasoned with a playful soundtrack by Nino Rota. Somewhere in the streets out there my every cinema dream took shape. My stomach is growling. But the rooftops are listening. Come back into the streets, they say.

All that’s missing is the hearty dish of pasta and a basket overflowing with crisp grissini, which can be easily had. You can find that trattoria you liked so much last trip, order a glass of chianti, take a moment to see who’s sitting at the next table. A spontaneous rendezvous? But first, the rooftops with their thousands of stories. They stretch into eternity and now I get it: no wonder they call this city Eternal. Here you have all the time in the world, and there is no time like the present. 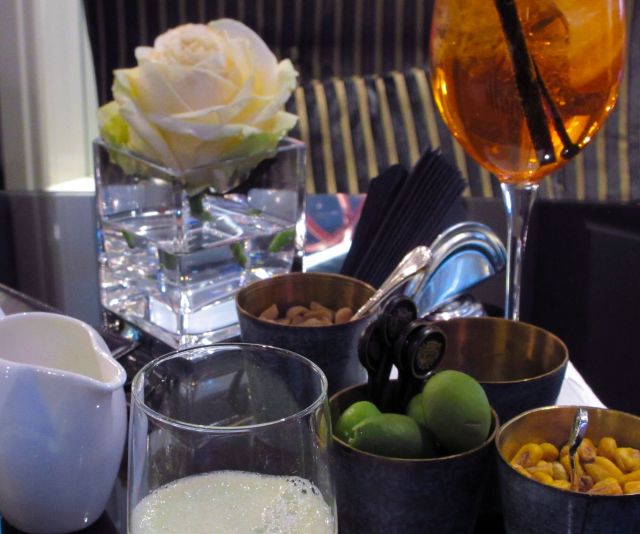 “I can never see all that there is when I’m out window shopping,” she comments. She means, perhaps, that she wants to stop in front of every display, and walk into half the stores where she pauses. She’s sitting in the bar at the Carlton, sipping her Spritz Aperol. She looks fantastic in her winter wool, in her chic sunglasses.

“It is true they change the windows frequently,” she says. “ I can go out tomorrow and there will be new things to happen upon.”

“You can reach most of the places you like on foot,” I say. “The Duomo’s less than ten minutes away. And that restaurant you liked, the one that published poetry books.”

“Then what are we waiting for?” she asks, taking a last sip, placing her glass decisively on the table next to a half-full dish of cerignola olives.

“I am waiting for you,” I say. “And I have all day. I shall follow you everywhere.”

“You are a magnificent man,” she tells me. “To give so generously of your time.” 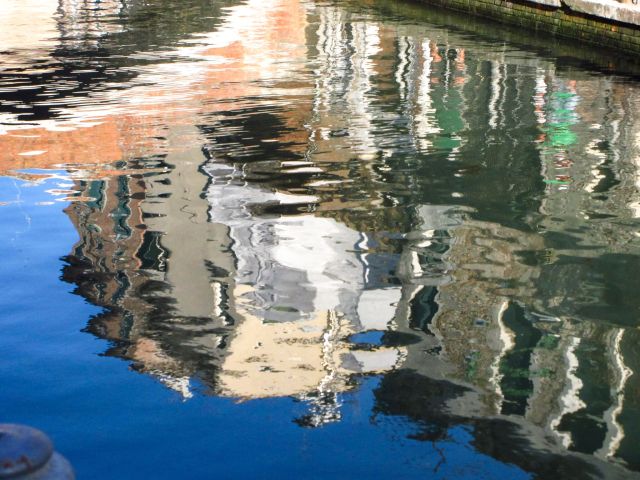 Real Venetians never walk fast, and here is why.

Venice is built on a foundation of tree trunks, taken from the nearby forests of the Veneto. The tree trunks were pounded into the silt of the lagoon. Atop such pilings the palaces were constructed. It took thousands of years for the forests to grow. Over the space of five centuries the Venetians built their city and their navies from the lumber they harvested.

The Basilica of Santa Maria Assunta on the island of Torcello is the oldest church in Venice, dating to 639. Ferries to Torcello run less frequently than the usual vaporetti, leaving from the Fondamente Nuove stop. Unless you charter your own boat, a trip to Torcello, a walk around and the return to proper Venice will last a half day.

The palaces of Venice went through stylistic fads from the 13th to the 18th centuries, and many were restored in the 19th century.  The Luna Hotel Baglioni palazzo, which is located just off Piazza San Marco, dates to 1118, and throughout the years has undergone transformations from a convent into an aristocratic palace and even a shelter for the Knights Templar.

A cruise down the Grand Canal will take you past Byzantine, Gothic, Baroque and Palladian examples. Popular outcry followed the destruction of many architectural treasures in the 19th century and led to the preservation mentality which no longer allows radical alterations to Venice’s historic landscape.

Which is why Venetians walk slowly. It has taken them a long time to get to this point, and hurrying will not be tolerated. 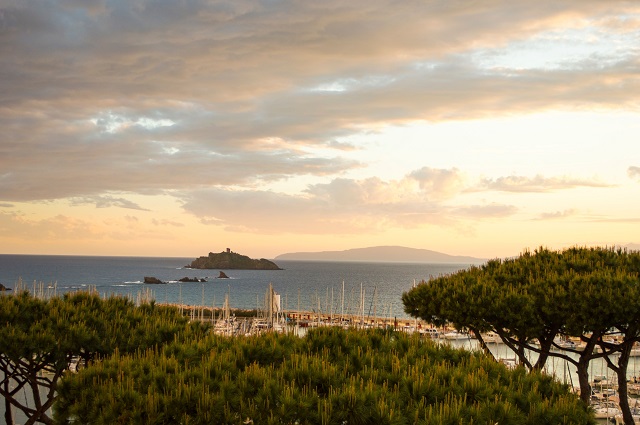 The horizon cannot have appreciably changed since 1974, when Roberto Polito built his first establishment here in Punta Ala, facing the islands of the Tuscan archipelago.

From the terrace of Hotel Cala del Porto, situated on a promontory above the marina and set among Maremma pines, distant Corsica is visible off to the left, with magnificent Elba straight ahead. To the north on the mainland reside the historic cities of Piombino and Carbonifera. This area’s historic excavations date back to Paleolithic times. Sites of iron mines established by the Romans can still be found on the island of Elba.

The sea cannot be rushed, nor can a voyage under sail. Once you cast off, it could be days before you return. If you can persuade your captain to set sail, he will plot a course to Portoferraio on Elba. You cross the white-capped channel, the same route which Napoleon Bonaparte took 200 years ago when he sailed into the tiny port on the north shore of the celebrated island. Napoleon spent almost a year of compulsive activity, building a road system, raising defenses, draining marshes, renovating palaces, plotting his escape and putting down a miners’ uprising which he caused after levying taxes on the poor fellows. A year later he left town, bound for Paris, eventual defeat at Waterloo, and final exile on the isle of St. Helena.  Despite the sad end to his story, people here still gratefully remember Bonaparte, in fact a mass has been said for him daily in local churches for the two centuries since he departed.

My plan is a more modest one: I shall stroll ancient lanes and seek out a table at an open air portside cafe, and sample a frate, the local donut which goes so well with one of those strong Italian coffees. Less ambitious than Napoleon, but immediately, sweetly gratifying. 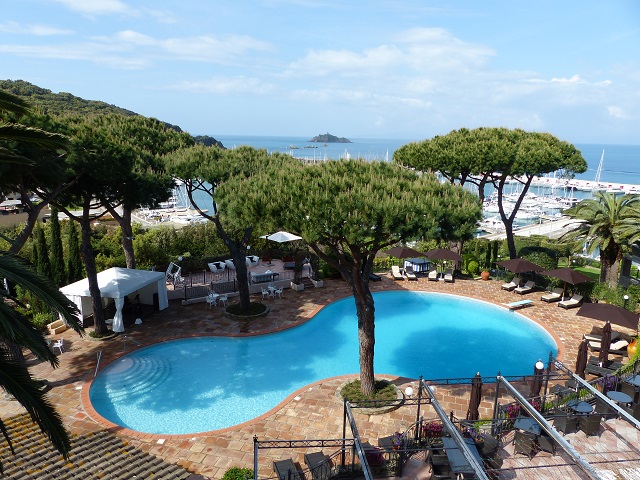 –Stanley Moss
Stanley Moss is a brand guru, philosopher, global gypsy, writer, and artist whose novel, The Hacker, was published in India. He’s Founder of The Club of Venice,a private conversation on brands and branding. He is also a faculty member at Verona’s Academia di Belle Arti Cignaroli, and Travel Editor for a New Zealand fashion magazine. Based in Vicenza, he thrives on food, conversation and multiple cups of Italian coffee. Stanley is travel editor and writes for Lucire and also has his own blog.

Concierge Tip: The Baglioni Tour has been specially designed for those who wish to visit several of Italy’s great historic centres on a single trip. Choose from inspiring destinations like Milan, Venice, Rome, Florence and Punta Ala and craft them into your own bespoke magical Italian tour as Stanley did above, graced by the unforgettable Italian touch. Email baglionitour@baglionihotels.com for help in formulating your dream itinerary.