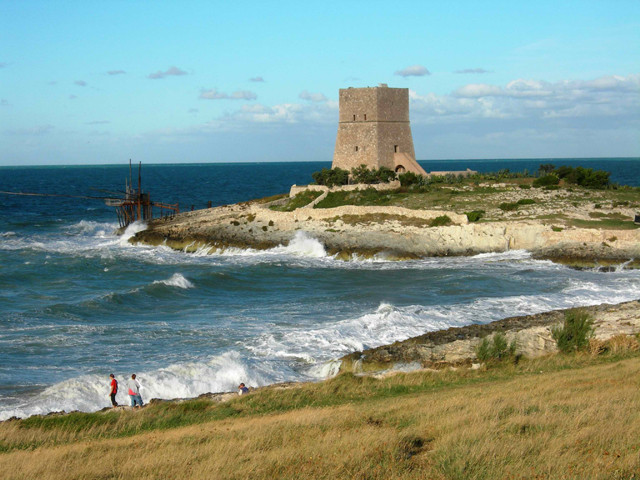 Puglia, also known as Apulia for non-Italians, is tucked in Italy’s picturesque south.

It is often referred to as the high heel of the Italian geographical boot, boasting of captivating cathedrals, breathtaking castles, historic towns and a sophisticated culture that runs deep with its rich past. The region also offers a scenic coastline with pristine waters, unique land formations and sandy beaches. Given all of that, it’s no wonder why savvy tourists keep coming back to this wonderful open secret of a place.

Rustic to elegant accommodations abound in Puglia and traveling is a breeze. Its people are very welcoming and sightseeing spots are less saturated than they are in other Italian tourism hotspots. Though it may not have the popularity of Rome, Venice or Florence, Puglia has been proven throughout history that it can capture the interest of visitors with ease. It has a distinct atmosphere that sets it apart from the rest of the country and it should be on top of your list if you want to see Italy in a different light.

So where exactly would you want to be if you ever make the trip to Puglia? Here are our ten favorite sites:

Castel de Monte in Andria. One of Puglia’s most notable castles, Castel de Monte in Andria is famous for its unusual octagon shape with octagonal towers at each corner to match. Its geometric design is a radical departure from typical Gothic castle motifs and it’s been the source of inspiration for beholders including author Umberto Eco in his book, Name of the Rose. It was built in the 13th century by Roman Emperor Frederick II and it has been described as his most fascinating castle. In fact, this UNESCO Heritage Site can also be seen in the reverse of the Italian one cent euro as a testament to its iconic status.

Castellana Grotte. This small Puglian commune’s natural beauty never fails to capture the hearts of the curious. Sitting in a location with amazing geological features, Castellana Grotte’s stunning rock formations and unique stalactites are mysteriously enchanting – perfect for daytime sightseeing whether you’re a spellunking enthusiast or a casual visitor. Its network of stream-sculpted caves are impressive, with some tunnels stretching several miles on end. If you want your trek to be more informative, there are educational workshops and tour guides in the area who can provide a comprehensive walkthrough. The longest tour that takes you to Castellana Grotte’s depths typically takes two hours, so make sure you’re well-prepared for a lot of trekking.There’s also a museum that can be enjoyed to cap off your adventurous journey.

Alberobello or the Trulli Town. Want to see something a little out of this realm? Trulli are small limestone houses made of drywall and topped with a conical roof. When clustered and viewed from a distance, Trulli would look like a village inhabited by fairies and gnomes straight out of a storybook. The residents of this locale, of course, are anything but supernatiral. They’re so real, in fact, that they dislike taxes as much as the average person does.

And that leads us to the interesting backstory of why Trulli roofs are designed the way they are. In the past, taxes were collected on a house-to-house basis by collectors that kings sent over. Everyone who lives under a roof is subject to taxation, so residents devised a type of roof that can be installed and uninstalled easily. The solution was the light conic roof that can be taken down whenever tax collectors headed to town. After they left, citizens would put the roofs back on and life continued without having to pay the ruling monarch what little money they had. The unexpected side effect is the creation of a modern-day tourist destination where roofs help the locals make money, not lose it.


Trulli houses with painted symbols on the conical roofs in Alberobello

Basilica di Santa Croce in Lecce. Being called the “Florence of the South” is clearly justified with Lecce’s wide array of art and historic monuments that are mostly found in cathedrals, churches and other religious institutions. The whole area is a gallery of art: visit Lecce’s Basilica di Santa Croce first and marvel at its massive structures and intricate interiors. It is as spectacular in the day as it is after dark when its carved facade showcase is well lit.


Basilica of Santa Croce in Lecce

Piazza Oronzo. Don’t leave the Baroque town of Lecce just yet because right at the center of it is a well-maintained Roman amphitheatre. It was built for the entertainment of the soldiers residing in the area during the imperial times, but was later lost to an earthquake that devastated the area. Excavations after World War II unearthed this ancient site and it was later restored to its former glory. Standing tall today, this tourist draw is a spectacle that endures for future generations to appreciate.

The Gargano promontory provides a long stretch of pristine beaches and seaside towns. At its peak is the medieval town of Monte Sant’Angelo, a popular destination for pilgrims who long to visit the Archangel Michael Sanctuary.  Inland, there’s Foresta Umbra, a protected woodland area promoting social and responsible tourism. If you want to learn a thing or two about appreciating good places while doing no harm, this is the right spot to be in.

Gallipoli, a beautiful city. Literally “a beautiful city” in Greek, tourists favor this place all year round for its mild weather. Like other Puglian beaches, the coast is clean and calm. Its inviting waters have been enjoyed by locals and tourists for generations and it’s a prime driver of the community’s livelihood. Gallipoli is a quaint place where one can explore everything by foot, though it’s highly accessible to modern vehicles as well. This city is also marked as a place where the past meets the present. Old churches remain intact here while skyscrapers are built in the business district. The contrast creates a striking yet pleasant view that’s hard to find anywhere else.

Trani Cathedral by the Sea. Iconic to sailors and tourists traversing the Adriatic Sea is Trani’s cathedral. Its strategic position puts it squarely in the backdrop of historic events and great expeditions that have happened in Puglia’s storied past.Trani is also a vibrant city with fine architecture, a network of streets and a charming fishing port – go ahead and explore these while mingling with the locals and soaking up the culture.

Bari and Christmas. Bari is Italy’s tenth largest city. It’s a center of history and a busy transportation hub, making it the most common entry point for visitors who want to see Puglia. There is a castle, a museum, a cathedral and religious monuments in the city but the site that you shouldn’t miss is the Basilica di San Nicola. This church is a popular destination among tourists and pilgrims because it was built to commemorate Saint Nicholas, whom we all know better as Santa Claus. The Basilica still holds his remains, making it ideal for people who want to pay their respects to the man who makes our holidays that much merrier.

Ostuni. Popularly called “The White City” for its white old walls and typical white-painted architecture, Ostuni is a can’t-miss sight for curious visitors to Puglia. It is a vibrant hillside town with stunning Adriatic sea views, distinct churches, monuments and architecture. If you’re in search of good weather, culture and fantastic cuisine, this city will be a dreamlike affair to you.

Puglia has plenty in store for everyone. This list is but a tip of the iceberg of delights that this region has to offer. If you’re looking for a touch of freshness in your travels to Italy, add this area to your list and you won’t be sorry.

Priscila Siano is the Marketing Director of Tour Italy Now, an online tour operator specializing in Italy travel. She's a respected expert on making dream Italy vacations a reality for clients. For more on Priscila and her work, connect with her on Google+,  LinkedIn, and Twitter.

Concierge Tip: Visiting Northern Italy but dreaming of Puglia? Chef Cosimo Giampaolo at Luna Hotel Baglioni in Venice has family roots in Puglia – reflected in some subtle influences on his predominantly Venetian dishes at Canova Restaurant.