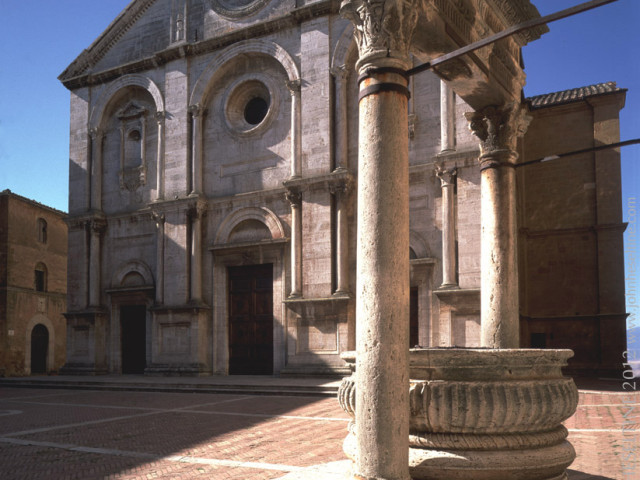 The autostrada East of Siena was temptingly swift and direct, but the weekend  was approaching and I wasn’t due in Rome until Sunday evening so what’s the rush ? I decided instead to have a day of diversion and indulgence: an enjoyable drive through beautiful landscape studded with picturesque hill towns, any one of which would surely be able to offer me a taste of quintessential Tuscan cuisine. However, it wasn’t all intended to be relaxing as I was also interested to explore sections of the Via Francigena, once the major medieval pilgrimage route to Rome from the North. I also remembered this area from years before and knew that with the right light I should be able to make some distinctive landscape photographs to add to my collection.
Leaving Siena along the SS438 I passed the strangely lunar landscape of the Crete Senesi hills where sheep graze on the grey clay to produce milk for the distinctive Pecorino cheese. Heading further South, passing woodlands where truffles abound, one could detour to Montalcino, the centre of Brunello wine production or to San Quirico d’Orcia, a small medieval market town dating back to the 8th century and an important staging post for pilgrims walking to Rome. But I was very keen not to linger too long as I wanted to reach Bagno Vignoni with its thermal baths famous since the time of the Etruscans and Romans, who consecrated these waters to the Nymphs.  Interest in them was revived during the Middle Ages, because of  their proximity to Via Francigena. Bagno Vignoni is described in a document dating back to 1334 as a "thermal spa arranged and surrounded by buildings and taverns with a chapel in the middle. It has a very beautiful square layout, with the spring divided in two parts and a roof for protecting the infirm." Heated by volcanic springs, the main pool displays steamy reflections of stone buildings, terracotta roofs and potted geraniums which dance playfully across its surface.
It was here that I decided to stop for a couple of hours for the Tuscan lunch I was so looking forward to and wait for the strong midday sun to soften as the afternoon wore on. There are plenty of options when it comes to choosing a restaurant in the Val d’Orcia area, but I was keen to sit outside where I could enjoy a view of the area, so I chose the friendly family run Ristorante La Parata which offers a varied menu of regional dishes with a personal twist added by Giancarlo Diodato, the chef and owner.
Feeling suitably fortified I next found myself heading East on the SS146 where the landscape beguiles the creative photographer as you approach Pienza. In the golden late-afternoon light I found myself continuously stopping to record the soft warm sunshine falling on the recently harvested cornfields.  Pienza itself is a small place situated on the ancient Via Cassia, delightful in its setting and its history, which can be re-enacted in one’s imagination as you walk around the town walls. Nearby, Montepulciano is one of the highest hill towns in Tuscany and is as renowned for its beautiful renaissance architecture as its vino nobile wine. Just before the motorway I took a short detour South to see the landscape at la Foce where countless photographers before me have immortalized the characteristic zigzag of cypresses following the winding road uphill. It was with regret that I rejoined the traffic heading toward the Eternal City, but I left feeling uplifted and determined to come back here for longer. 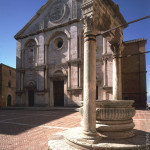 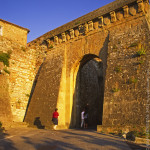 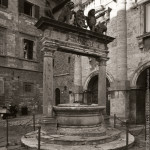 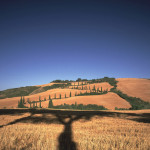 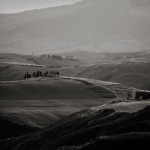 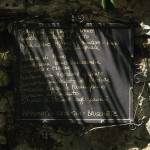 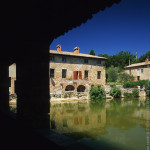 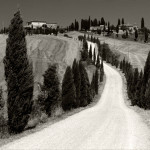 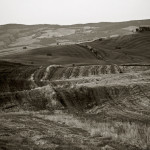 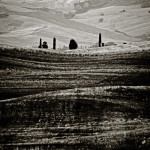 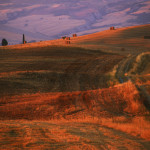 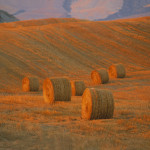 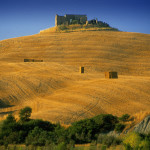 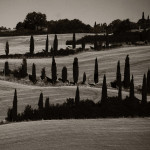