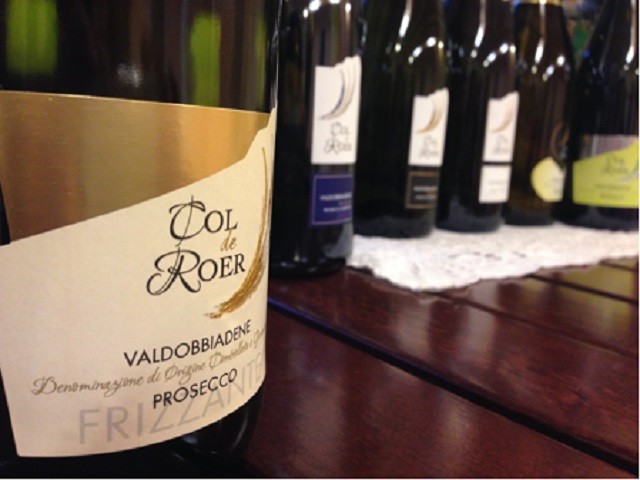 Situated equidistantly between the Dolomites and the Adriatic sea lies Valdobbiadene, against the distinctive backdrop of steep hills alternating with gentle descents and dominated by an endless matrix of vineyards.

This unique region of Italy was granted DOCG status – “controlled designation of origin guaranteed”, the level above the DOC designation – in 2009. The “G” for guaranteed is the result of years of hard work to achieve outstanding quality at every stage of strictly controlled processing and production. One of the distinguishing features of DOCG Prosecco is that it is produced within just 15 hilltop municipalities between the two production capitals of Conegliano and Valdobbiadene.

This land lies between 50 and 500 metres above sea level and enjoys winters that are long but not cold and summers that are hot but not humid. A unique microclimate that is perfect for these particular vines.

The special characteristic of this region is its moraine soil, which gives the wine a rich and original bouquet.

People here are proud of their roots and have kept the wine tradition alive for centuries.

Prosecco’s origins date back to Roman times. The Romans introduced it to the Treviso area around 2000 years ago. After the year 1000, Benedictine monks expanded and further refined cultivation of the vines. In 1500, the Republic of Venice became involved in viticulture in the area.

The charm of this region of gentle, undulating hills lies in its old vines, which have an average age of 70-80 years and can provide highly complex and diverse tasting wines.

Here I am at one of my favourite wineries in the region, although not necessarily the most commercial. It is a real delight and just what zealous tourists are looking for. We’re talking 6 hectares of vines on this wonderful hill named Col de Roer. Prosecco has been produced here by generations of the Stramare family, employing a combination of local traditions and culture passed down from father to son.

The cellar is built out of real stone and can be found on a section of land where a monastery once stood.

The singularity of these vineyards lies in the limited hectarage of the land they occupy, making it a dream for many to own just a few hectares. It’s not an issue of money. Rather, the prestige of this land stems from the affection and the indissoluble bond its owners have with it.

During your stay in Venice, don’t forget to include Valdobbiadene in your holiday schedule. You’ll find it just an hour’s drive away, magically nestled in the famous Prosecco Country.

Stefania Matarrese is a freelance writer, traveller, dancer and citizen of the world with a passion for marketing and communications. See her favourite photos on Flickr. And follow her on Twitter.

Concierge tip: A wine excursion in Valdobbiadene is a great way to complement a stay in Venice with the Baglioni Breakfast Inclusive offer at Luna Hotel Baglioni which includes an enticing buffet breakfast.